This blog was published on the Centre for Urban Studies website in September 2017. It is authored by Wouter van Gent, Cody Hochstenbach and Justus Uitermark.

The Rotterdam Act forbids certain groups of poor residents from moving into particular neighborhoods. In a recent paper we analyze the rationales behind the Act and evaluates its effects.

Deprived neighbourhoods and their ‘liveability’

Imagine moving to a new city to start a new life, meaning finding a place to live and a job. You have some savings but you need to find a cheap place to get started. Luckily, you found somewhere to live; it’s not the best neighbourhood in town but it’s affordable and just 15 minutes from the city centre. Everything is set, but then the landlord tells you that the municipality does not allow you to rent in the neighbourhood because the municipality worries that your presence might reduce the area’s liveability.

Or imagine that you are a single parent in that same neighbourhood. You are on benefits and struggling to make ends meet. Things even became so hard that you had to briefly stay with relatives in the east, but you’re back now. One day, you get a call from the housing association: they want to renovate your apartment and they offer you a new one nearby. Good news; a better place to live and the kids can stay in school. But, after agreeing to it, the housing association informs you that the municipality does not allow you to rent the new apartment, and you have to live in another neighbourhood. Apparently, your presence is inhibiting policy efforts that seek to resolve social issues in the area.

While fictitious, these two scenarios are real possibilities in some Dutch municipalities. In fact, a case similar to the second scenario is currently pending at the European Court of Human Rights. In 2006, the Dutch government introduced the ‘Act on Extraordinary Measures for Urban Problems’ as a way to combat social ills in deprived neighbourhoods and improve their ‘liveability’. To do so, the Act contains several stipulations, but has been most controversial for its exclusionary provisions in chapter 3, article 8. When a neighbourhood is designated, this article requires households to obtain a housing permit when moving to a rent-regulated dwelling (including privately-owned) in the area. The municipal government refuses the housing permit if prospective residents do not meet the following criteria: income from work, wealth or pensions, or enrolled in higher education, or living in the metropolitan region for at least six continuous years.

The Act was instigated and first implemented by the Rotterdam municipality, which is why it is colloquially known as the ‘Rotterdam Act’. We have traced the history of the Rotterdam Act elsewhere, showing it became part of the standard tool kit of policy makers. However, while a wide spectrum of political parties supported the Act, it never ceased to be controversial as its reliance on exclusionary measures amounts to the curtailment of fundamental rights for jobless newcomers. Proponents have argued that individual rights can, and often are, suspended when it serves a greater good, and that governments should opt for the most effective policies, even if those policies violate the rights of some groups under some conditions. In light of this reasoning, members of Dutch parliament requested that the Act’s effects should be evaluated. Late 2014, we were awarded a contract by the Ministry of the Interior to investigate a) the social characteristics of those who are not eligible to live in designated areas and their housing market position, and (b) the changes in five designated areas in terms of social composition, livability, and safety.

Our paper presents the findings of this evaluation. Using longitudinal register datasets, housing market data and survey data for a two-year period before implementation (2004-2005) and seven years after (2006-2013), our quantitative analyses show that the Act has significantly worsened the housing possibilities for those who are not eligible to enter. It also had an effect on wider residential mobility flows and the social mix of the designated areas, but it seemed to have had no effect on living conditions such as safety and nuisance (see figure). Given the objectives and rationales and the extraordinary measures, this finding is remarkable. Yet, it has not led to any changes in policy. On the contrary, as of 2017, new criteria of exclusion have been added that pertain to reports of nuisance, police records, criminal convictions or suspicions of jihadism. Furthermore, the Act continues to be rolled out to new neighborhoods and other municipalities. 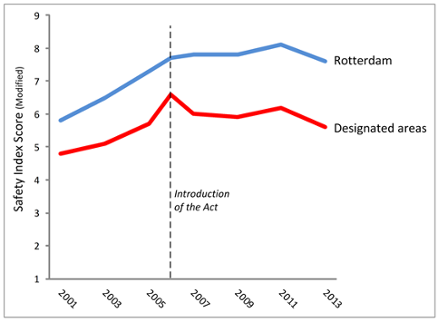 Figure 1. The average Safety Index scores (based on reported incidents and perceived safety and nuisance, modified for our analyses) for Rotterdam municipality and for five evaluated neighbourhoods (weighted according to population size). Source: Authors’ calculation based on Safety Index data (Dienst Veiligheid, Rotterdam).